Alastair Hignell: my first ball - a double courtesy before the reality from Robin Jackman

I was 18. It was batting number three and facing Robin Jackman. As I took guard, I heard a muttering behind the wicket. Cyril (Roope) was trying to convince Ob (Long) of something. Ob nodded, raised an arm and shouted to the bowler who had just reached the beginning of his run up, a full fifty yards away.

Jackman nodded and started to race in. When he arrived at the wicket, though, he slowed right down to deliver a gentle ankle high full-toss.

I was far too early on the stroke but still managed to shovel it into a gap. “Two!” I cried, completely forgetting the time-honoured custom that decreed that debutants should be helped to get off the mark in their first ever innings – with a single. I quickly realised that I was the only player in the field that expected more.

Roger Knight was as startled to find me alongside him at the striker’s end as he was intrigued to observe how Jackman would deal with my perceived lack of courtesy. So were the Surrey fielders, as they allowed him to trot back to the non-striker’s end. The next ball was a bouncer, delivered with twice the speed and four times the venom of my first ball. Everyone on the ground knew it would be a bouncer. Except me.

I got in a fearful tangle and spooned a gentle catch to Geoff Howarth at cover. 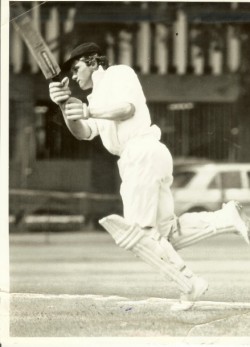